From Zelda Dungeon Wiki
Jump to navigation Jump to search
Want an adless experience? Log in or Create an account.
Reclaim the Land 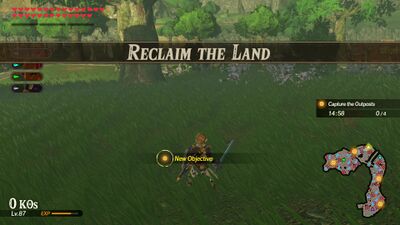 "Monsters have taken control of Hyrulean army outposts. Remove the monsters, and retake the outposts!."

Reclaim the Land is a challenge scenario of Hyrule Warriors: Age of Calamity, unlocked by completing the All Hyrule, United scenario.

Play as any four warriors and battle to capture all four of the outposts. They are guarded by a Frost Talus, Guardian, Guardian Skywatcher, and an Electric Hinox. During the challenge a Silver Lynel and multiple Silver Moblins will also spawn and could reclaim one of the outposts.

Completing the challenge will unlock four additional challenges, including Footsteps of the Giant, Rito Discipline, Taming the Savage Lynel, and Goron Spirit.