From Zelda Dungeon Wiki
Jump to navigation Jump to search
Want an adless experience? Log in or Create an account.
A Hidden Treasure 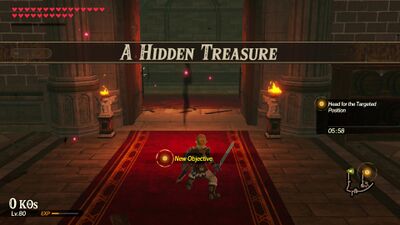 "It is said that there is a treasure sleeping within the castle. Nobody knows how long it has been there... Overcome any obstacles, and locate this hidden treasure!"

Search Hyrule Castle and find the treasure chest within the allocated 6-minutes. First, just run ahead down the narrow path until you encounter some Yiga Footsoldiers. Defeat them, along with the Yiga Blademasters that appear. After 100 enemies are defeated, the door will open and the warrior can continue towards the target. Once you reach the target, Sooga will appear.