From Zelda Dungeon Wiki
Jump to navigation Jump to search
Want an adless experience? Log in or Create an account.
Terrako's Training 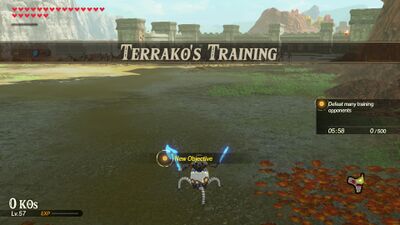 Terrako's Training is a challenge scenario of Hyrule Warriors: Age of Calamity, unlocked by completing the Terrako's Return quest. The challenge serves as an introduction to playing as Terrako, where it will need to defeat 500 Hylian Soldiers within the 6-minutes of allocated time. After 500 enemies have been defeated, King Rhoam will appear and will need to be defeated to complete the challenge.

Completing the challenge will unlock the Guardian Showdown challenge.