From Zelda Dungeon Wiki
Jump to navigation Jump to search
Want an adless experience? Log in or Create an account.
Anti-Flame Training: III 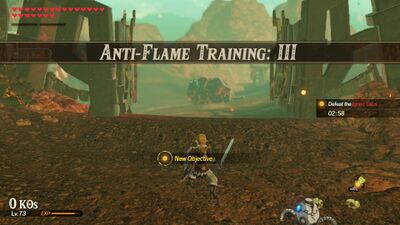 "Fire is often a source of safety and security for people, but sometimes it does get out of hand. Conquer and fears of flame and defeat the monsters!"

Anti-Flame Training: III is a challenge scenario of Hyrule Warriors: Age of Calamity, unlocked by completing the Water and Fire, as well as Air and Lightning scenarios. An Igneo Talus will need to be first defeated, followed by a pair of Fire Guardians, and then Fireblight Ganon.