From Zelda Dungeon Wiki
Jump to navigation Jump to search
Want an adless experience? Log in or Create an account.
Volcanic Defense 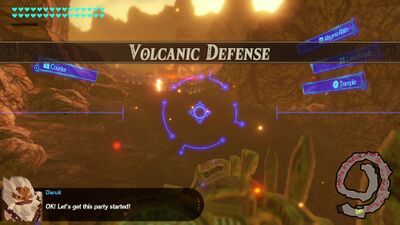 "A horde of Lynels have appeared on Ploymus Mountain. Drive out these fierce foes with the power of Divine Beast Vah Ruta."

Volcanic Defense is a challenge scenario of Hyrule Warriors: Age of Calamity, unlocked by completing The Yiga Clan Attacks! Play as Divine Beast Vah Rudania and defeat 4,000 enemies in the targeted amount of time of 5-minutes. The main obstacle are the Igneo Talus that launch lava plumes out at Rudania at Ruta. Persistently use the Lava Bomb attack to deal damage to the enemies, charging up a Magma Rain attack when the meter is filled. Always target the Igneo Talus that are on the screen with the Magma Rain. To block their attacks, Rudania can use its Counter ability. When the meter is filled, Rudania should unleash a special attack, which lays waste to all enemies that it targets.