From Zelda Dungeon Wiki
Jump to navigation Jump to search
Want an adless experience? Log in or Create an account.
Two Chiefs 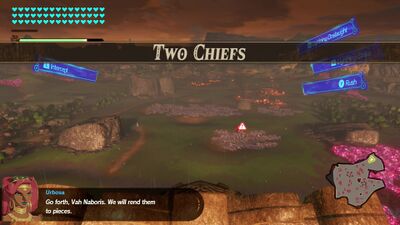 "As Urbosa and Riju train with Divine Beast Bah Naboris, a swarm of Guardians suddenly activates near them. It is up to the two Gerudo chiefs to suppress this threat."

Two Chiefs is a challenge scenario of Hyrule Warriors: Age of Calamity, unlocked by completing the Each Step Like Thunder scenario. Play as Divine Beast Vah Naboris and defeat the Guardians that appear in the allocated 5-minutes of time. Initially there are 10 Guardians, but as more enemies are defeated 5 additional guardians appear. They will keep appearing until there is a total of 30 Guardians. Defeat all of them before time expires to complete the mission.