From Zelda Dungeon Wiki
Jump to navigation Jump to search
Want an adless experience? Log in or Create an account.
Chief-of-the-Dunes Battle 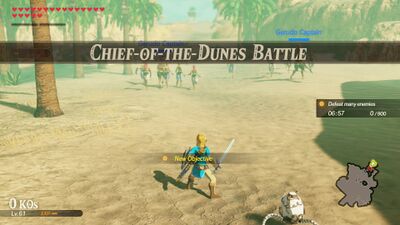 "Powerful monsters are gathering in the Gerudo Desert. Defeat them all to prove that you are the strongest warrior in the arid region."

Chief-of-the-Dunes Battle is a challenge scenario of Hyrule Warriors: Age of Calamity, unlocked by completing Pursue the Yiga Clan! The challenges requires the warrior to defeat 900 enemies within the allocated 7-minutes of time. There are initially Red Bokoblin, but Blue Bokoblin and Black Bokoblin eventually appear. Likewise, a Moblin appears, but later one, Blue Moblins and Fire Moblins will spawn.

After 900 enemies have been defeated, a Molduga will spawn. Defeat the Molduga to complete the challenge.