From Zelda Dungeon Wiki
Jump to navigation Jump to search
Want an adless experience? Log in or Create an account.
Hunting Partners 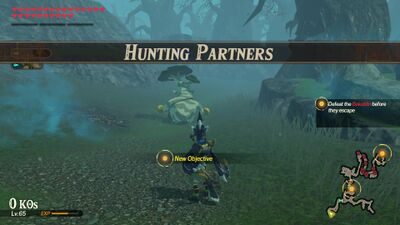 "Bokoblins have stolen important materials and fled into the woods. Revali has decided to pursue them along with Hestu, whose knowledge of the woods should be helpful."

Hunting Partners is a challenge scenario of Hyrule Warriors: Age of Calamity, unlocked by completing The Future of Hyrule scenario.

Play as Revali and Hestu and defeat the Bokoblin before they are able to escape. There are a series of enemies that will need to be defeated, which include a bunch of Black Moblin and Silver Moblin. Eventually, the Bokoblin will begin moving and it will prompt you that it is close to escaping. Dodge the Guardians towards the end and defeat the single Bokoblin to complete the challenge.