From Zelda Dungeon Wiki
Jump to navigation Jump to search
Want an adless experience? Log in or Create an account.
Hair-Width Trial: Beginner 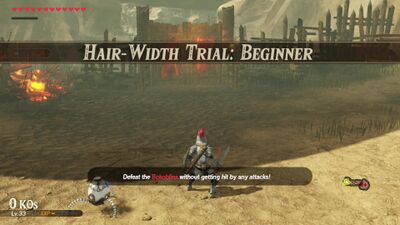 "A new trial has emerged. The power of enemy attacks has been augmented—be careful not to get struck by any attacks."

Hair-Width Trial: Beginner is a challenge scenario of Hyrule Warriors: Age of Calamity, unlocked by completing the first four scenarios in Chapter 2. The selected character must defeat 40 Bokoblin without taking a single attack; then capture the Outpost by defeating the Blue Bokoblin which inhabit it and the Outpost boss, a large Blue Bokoblin.