From Zelda Dungeon Wiki
Jump to navigation Jump to search
Want an adless experience? Log in or Create an account.
King's Escort 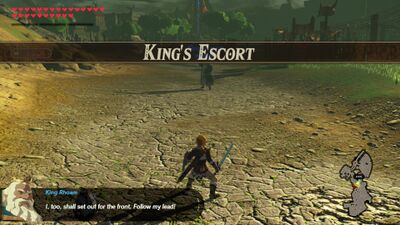 "King Rhoam is in need of an escort, but this is no honor guard. Protect the king from the monster threat!"

King's Escort is a challenge scenario of Hyrule Warriors: Age of Calamity, unlocked by completing King Rhoam's Training challenge. The warrior will need to help King Rhoam reach the targeted position within the 8-minutes of allocated time. Along the way, the warrior will need to battle a Silver Moblin, Electric Moblin, Fire Moblin, and a Ice Moblin. Just before reaching the target, a Fire Hinox will appear, with an Ice Hinox appearing shortly after.

Completing this challenge will unlock the Coliseum: Expert challenge.