Fierce Gale of the Rito

From Zelda Dungeon Wiki
Jump to navigation Jump to search
Want an adless experience? Log in or Create an account.
Fierce Gale of the Rito 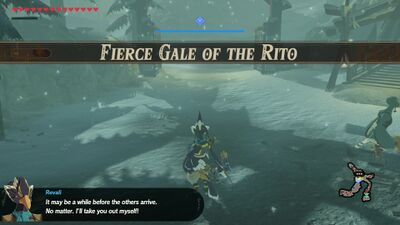 "Monsters have been spotted in Rito Village, and Revali is quick to the fight. Hold off the enemy until Rito reinforcements arrive."

Fierce Gale of the Rito is a challenge scenario of Hyrule Warriors: Age of Calamity, unlocked by completing Protector of the Forest. Play as Revali and defend the allied stronghold. In order to complete the challenge, Revali must fight off the Blue Moblins, Ice Moblins, and Ice Wizzrobes that attack the stronghold. As long as the stronghold survives in the 5-minutes of allocated time, Revali will complete the challenge.