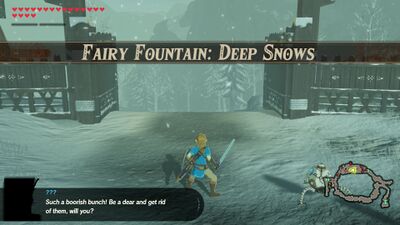 "The party has traveled to the Tabantha Frontier in search of a Great Fairy. Clear a path to the Great Fairy's location, defeating any monsters along the way."

Fairy Fountain: Deep Snows is a challenge scenario of Hyrule Warriors: Age of Calamity, unlocked by completing the Offering Help on the Road quest. It is one of the three initial challenges in the Trial of the Great Fairies. Completion of all three unlocks the final challenge in the series, Fairy Fountain: Battlefield.

Unlike Fairy Fountain: Grassy Plains and Fairy Fountain: Desert Sands, the challenge is not time limited. Instead, the player's warrior must protect a Rito Captain from attacking Blue Moblins, while defeating five Ice Moblins to progress in the challenge. On defeating the Ice Moblins, any remaining enemies will leave, and five 300 rupee chests appear in the Outpost in the centre-north of the map. Collecting the rupees will trigger Kaysa's bud to appear east of the Outpost. Paying the collected rupees to her will lead her to test the warrior, and defeating her will successfully end the challenge.