From Zelda Dungeon Wiki
Jump to navigation Jump to search
Want an adless experience? Log in or Create an account.
Hestu's Training 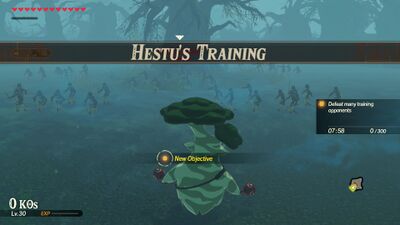 "Hestu used to diligently practice dancing in the forest, but he is growing tired of dancing alone. Suddenly an appropriate training partner appears."

Hestu's Training is a challenge scenario of Hyrule Warriors: Age of Calamity, unlocked by completing Freeing Korok Forest. Play as Hestu and battle against the Hylian Soldiers in Korok Forest. Hestu will need to defeat 300 enemies in the allocated 8-minutes of time. Hylian Captains will occasionally appear on the battlefield. After 300-enemies are defeated, Impa appears on the battlefield.