From Zelda Dungeon Wiki
Jump to navigation Jump to search
Want an adless experience? Log in or Create an account.
Messenger's Escort 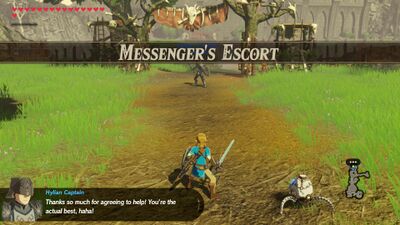 "A messenger needs to deliver news to the town, but monsters have made the roads dangerous to travel unaided. Chase off the monsters, and escort the messenger safely to their destination."

Messenger's Escort is a challenge scenario of Hyrule Warriors: Age of Calamity, unlocked by completing The Road Home, Besieged.

Play as any warrior and escort the Hylian Captain to the targeted position. Along the way, defeat the Blue Bokoblins and the Blue Moblin that appear. Further along, some Blue Lizalfos will halt the character's progress, as well as more Blue Moblins. When the warrior reaches the final position, they'll have to fight off a Hinox to get the messenger to their destination.

Completing the challenge will unlock the Daily Drills: Hyrule and The Royal Escort challenges.