From Zelda Dungeon Wiki
Jump to navigation Jump to search
Want an adless experience? Log in or Create an account.
Cross the Volcano 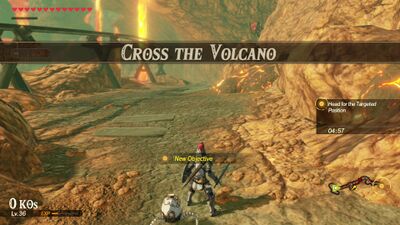 "It's time to make a journey across the burning landscape of Death Mountain. The area is known for its brutal, blistering heat, so don't linger too long!"

Cross the Volcano is a challenge scenario of Hyrule Warriors: Age of Calamity, unlocked by completing the Cross the Hebra Mountains challenge. Play as any warrior and fight off the fire-based enemies.

The player will need to reach the target point within the allocated five minutes . There are Fire-Breath Lizalfos, Fire Keese, and Igneo Pebblits, found throughout the level. The player will first need to defeat a Moblin to open the gate and then a Fire Moblin to open the bridge. At one point in the map there is an off road that can be taken, leading to an enemy base with an Electric Wizzrobe.

Once the player reaches the target point, they'll face an Igneo Talus. Once this is defeated, the challenge will be complete.

Completing the challenge will open the Daily Drills: Goron challenge.