From Zelda Dungeon Wiki
Jump to navigation Jump to search
Want an adless experience? Log in or Create an account.
Through the Storm 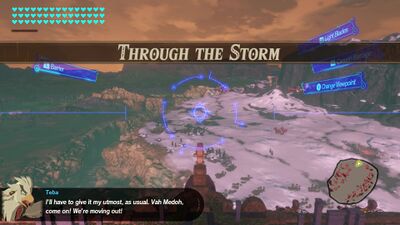 "Windblight Ganon has appeared. It's a powerful, dangerous foe, but retreat isn't an option. Use Divine Beast Vah Medoh to its fullest, and seize victory."

Through the Storm is a challenge scenario of Hyrule Warriors: Age of Calamity, unlocked by completing The Future of Hyrule scenario. Play as Divine Beast Vah Medoh and defeat Windblight Ganon and the enemies that appear in the allocated 5-minutes of time. Medoh will need to defeat 3,000 enemies to complete the challenge.

After completing this challenge, along with the final three Divine Beasts, the True Strength challenge will unlock.