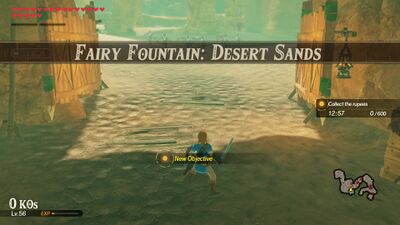 "The party has traveled to the Gerudo Desert in search of a Great Fairy. They are being guided across the desert by a mysterious voice when they suddenly come upon Yiga Clan members."

Fairy Fountain: Desert Sands is a challenge scenario of Hyrule Warriors: Age of Calamity, unlocked by completing the Offering Help on the Road quest. It is one of the three initial challenges in the Trial of the Great Fairies. Completion of all three unlocks the final challenge in the series, Fairy Fountain: Battlefield.

Upon starting, the player is charged with bringing a shadowed figure 600 rupees from the Yiga Clan "bandits' purses". Standard Yiga Footsoldiers drop as little as a Green Rupee (1 rupee) each, Yiga Blademasters drop a Purple Rupee (50 rupees). A Blue Moblin must be defeated to open a gate, and a Stone Talus must also be cleared to make more Yiga Clan appear.

Upon collecting the rupees and heading for the targeted position, the figure takes the collected rupees and emerges from her bud as the Great Fairy Tera, who promises to lend the player their strength if they will show her theirs. Defeating Tera will prove this and end the challenge successfully.