From Zelda Dungeon Wiki
Jump to navigation Jump to search
Want an adless experience? Log in or Create an account.
Escape the Lost Woods 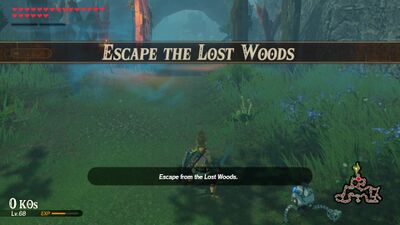 "On the way back from Korok Forest, the party is attacked by monsters in the Lost Woods. Defeat the enemies that block the way, and escape from the woods!"

Escape the Lost Woods is a challenge scenario of Hyrule Warriors: Age of Calamity, unlocked by completing When Courage Fails. Play as any hero and try to reach the end point within the allocated 8-minutes of time. Parts of the Lost Woods are blocked off with walls and you'll have to take a detour.

From the outpost, travel west, then south, and then head east. Continue to the far east end of the map and then head south, making a direct way to the final destination. Stalmoblin will appear along your path and once you reach the end, you'll confront a large Stalnox. After the Stalnox has been defeated, head to the exit point to complete the challenge. Completing the challenge will open up the In the Clutches of the Yiga! challenge.