From Zelda Dungeon Wiki
Jump to navigation Jump to search
Want an adless experience? Log in or Create an account.
The Guardians Counterattack 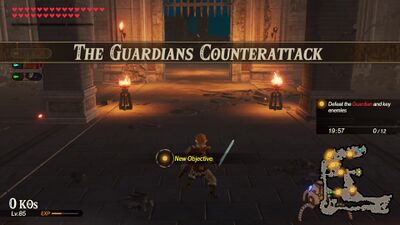 "A swarm of Guardians is advancing on Akkala Citadel. This large-scale attack will require an overwhelming response if it's to be repelled. Defeat the Guardians, and defend the citadel!"

The Guardians Counterattack is a challenge scenario of Hyrule Warriors: Age of Calamity, unlocked by completing The Great Plateau scenario. Play as any three warriors and fight off the guardian attack within the 20-minutes of allocated time. The 12-guardians will need to be defeated, which includes a Fire Guardian, two Guardian Skywatchers, two Guardian Turrets, three Malice Guardian, an Electric Guardian, an Ice Guardian, and two Guardian Stalkers. Additionally, there are multiple Guardian Scout Is on the battlefield.