The Siege of Fort Hateno

From Zelda Dungeon Wiki
Jump to navigation Jump to search
Want an adless experience? Log in or Create an account.
The Siege of Fort Hateno 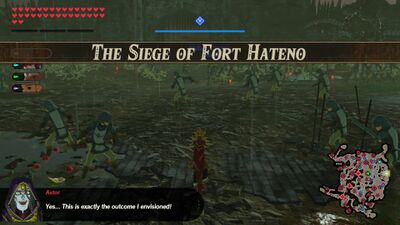 "An army of monsters and Guardians has appeared at Fort Hateno. Defeat the assembled enemies before the area is left in ruins."

The Siege of Fort Hateno is a challenge scenario of Hyrule Warriors: Age of Calamity, unlocked by completing the Versus Calamity Ganon challenge. Play as any four unlocked warriors and defeat Astor and Harbinger Ganon. Throughout the challenge, numerous guardians will attack Fort Hateno. In order to reach Astor and Harbinger Ganon, a number of enemies will need to be defeated to unlock the gates in front of them. After the two enemies are weakened, they will flee to other parts of the map, requiring more enemies to be defeated.

Once Astor and Harbinger Ganon are both defeated, Calamity Ganon will need to also be fought. All three major bosses will need to be defeated within 10-minutes of allocated time, without allowing Fort Hateno to fall.