From Zelda Dungeon Wiki
Jump to navigation Jump to search
Want an adless experience? Log in or Create an account.
Fire Hazards 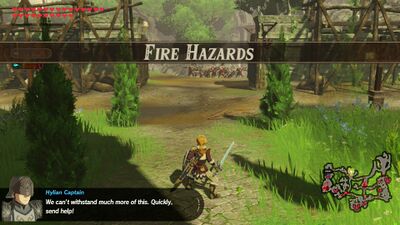 "Monsters wreathed in flames have appeared! Help firefighters stop the fire from spreading by defeating the monsters!"

Fire Hazards is a challenge scenario of Hyrule Warriors: Age of Calamity, unlocked by completing the Relentless as a Waterfall scenario.

There are five fire enemies that need to be defeated to complete the mission. Initially, there is only 3-minutes of time, but after each major enemy is defeated, 2-additional minutes are added. If there is more than 3-minutes on the timer when an enemy is defeated, the timer will max at 5-miuntes. There is a Fire Moblin at the west, southwest, and southeast parts of the map. A Fire Lynel can be found to the east, and a Fire Hinox at the south.