From Zelda Dungeon Wiki
Jump to navigation Jump to search
Want an adless experience? Log in or Create an account.
Revali's Training 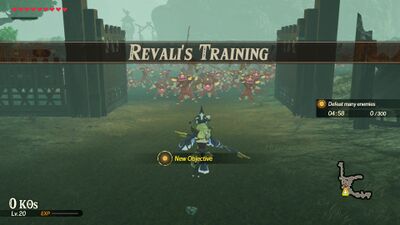 "Among all the Rito, Revali's skill with a bow is second to none. This did not happen overnight, and he knows that training is the only way to ascend to even greater heights."

Revali's Training is a challenge scenario of Hyrule Warriors: Age of Calamity, unlocked by completing the Revali, the Rito Warrior Chapter 2 scenario. The level is filled with red Bokoblins. Revali will need to defeat 300 enemies before time expires, followed by two red Moblins. Completing Revali's Training will unlock the Learning to Become the Wind quest and the Anti-Ice Training: I challenge.