From Zelda Dungeon Wiki
Jump to navigation Jump to search
Want an adless experience? Log in or Create an account.
Strike It Rich 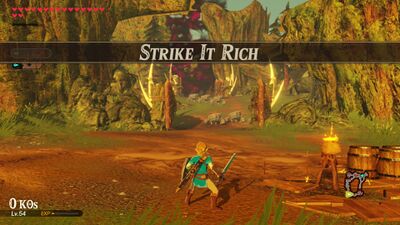 "It is said that there is a place where many Taluses like to gather. Fight them, defeat them, and collect some rare ore too!"

Strike It Rich is a challenge scenario of Hyrule Warriors: Age of Calamity, unlocked by completing the Akkala Tower mission.

The two player characters must defeat the two Stone Taluses within 8 minutes. Additionally, there are a bunch of Stone Pebblits roaming around. The areas with each Talus are blocked off from each other with permanently-locked gates with one character in each, so both warriors must be used to complete the challenge.