From Zelda Dungeon Wiki
Jump to navigation Jump to search
Want an adless experience? Log in or Create an account.
Crenel Peak 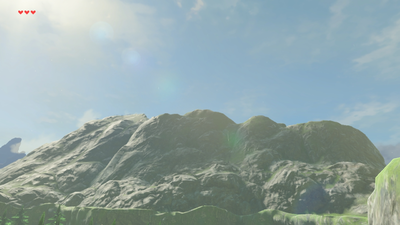 Crenel Peak is a mountain from Breath of the Wild.

Though notionally part of the Hyrule Field area, it lies just on the Lanayru side of the Central Hyrule/Lanayru border, where the Crenel Hills to the north lie on the Central Hyrule side. At the peak of the mountain, there are numerous Ore Deposits, including a Rare Ore Deposit.

Just west of the peak, there is a giant watchtower that looks over the region and has a great view of Hyrule Castle. Just south of the watchtower, there is a tree base with numerous rusty weapons, including a Rusty Halberd, Rusty Claymore, and a Rusty Broadsword. A treasure chest can also be found here, containing a Purple Rupee.

Just southwest of the peak, near the small pond, there is an assortment of animal life, including some Honeyvore Bears. Further west of Crenel Peak, on the west side of the path, closer to the Hylia River is an enemy base. There are a number of enemy Bokoblin and Moblin in the area who are guarding a treasure chest which contains five Fire Arrows. 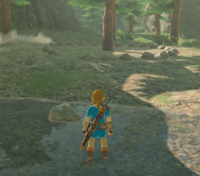 Use the rock to complete the circle.

Use the rock to complete the circle. 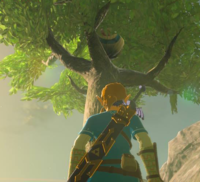 Shoot the balloon hiding in the tree.

In the tree is a balloon. Shoot it.