From Zelda Dungeon Wiki
Jump to navigation Jump to search
Want an adless experience? Log in or Create an account.
Hyrule's Greatest Warrior 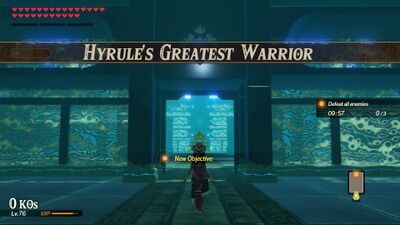 "It's a question everyone has asked at one time or another: Who is the strongest in all of Hyrule? It's time to find out for sure! Wind the fight to claim the title!"

Hyrule's Greatest Warrior is a challenge scenario of Hyrule Warriors: Age of Calamity, unlocked by completing The Future of Hyrule scenario.

Play as almost any unlocked warrior and go through a boss gauntlet, taking on some tough warriors. The warrior will need to face off with Revali, Master Kohga, and Link, defeating all three of them within 10-minutes. Next, defeating Harbinger Ganon in order to complete the challenge.

Completing this challenge will unlock the Remnants of the Calamity and Miss Vai Battle Pageant challenges.