From Zelda Dungeon Wiki
Jump to navigation Jump to search
Want an adless experience? Log in or Create an account.
Fight Lightning with Lightning 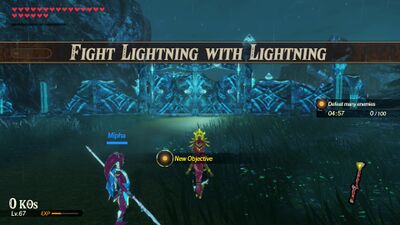 "Electric Lizalfos have appeared near Zora's Domain. Aware of the Zora's weaknesses to lightning, Riju sets out to tackle this threat for them."

Fight Lightning with Lightning is a challenge scenario of Hyrule Warriors: Age of Calamity, unlocked by completing the Each Step Like Thunder scenario. Play as Riju and battle with the electric enemies. Riju will need to defeat 100 enemies in 5-minutes as she makes her way through the stage. After defeating 100 of them, she'll have to face off with an Electric Lynel.

Completing the challenge will unlock the Wisdom of the Storm challenge.