From Zelda Dungeon Wiki
Jump to navigation Jump to search
Want an adless experience? Log in or Create an account.
Anti-Ice Training: II 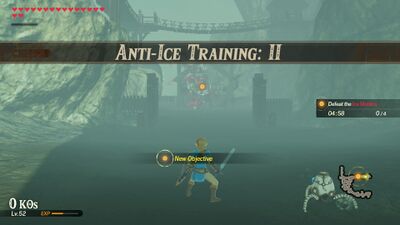 "Ice monsters are threatening the livelihoods of innocent people! Defeat the monsters and overcome the cold, before things get worse."

Anti-Ice Training: II is a challenge scenario of Hyrule Warriors: Age of Calamity, unlocked by completing the Akkala Tower mission. The player's character must defeat four Ice Moblins in the allocated 5-minutes of time. After which, a Frost Talus will need to be defeated within 3-minutes of time.