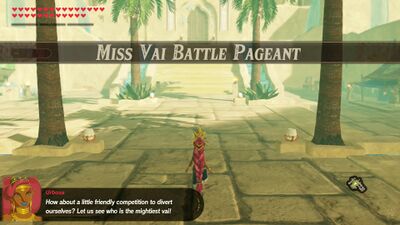 "Contestants from all across Hyrule gather in Gerudo Town to face off in the Miss Vai competition. The contest begins now!"

Play as any female, or gender ambiguous warrior and go through a boss gauntlet, taking on the Miss Vai contenders. You will need to face off with Impa, Urbosa, Riju, Mipha, and Zelda. If one of these warriors are being used, Tera will be a boss in their place. After they all are defeated, Link will appear, disguised in the Gerudo Clothes.