From Zelda Dungeon Wiki
Jump to navigation Jump to search
Want an adless experience? Log in or Create an account.
Daily Drills: Goron 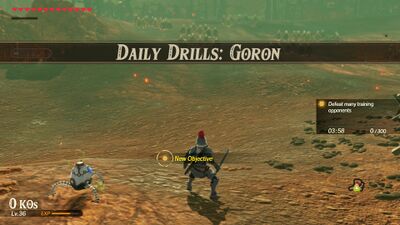 "Today's assignment is joint training exercises with Goron forces. Spar with the soldiers that are heading your way."

Daily Drills: Goron is a challenge scenario of Hyrule Warriors: Age of Calamity, unlocked by completing the Cross the Volcano challenge. Play as any warrior other than Daruk and defeat 300 "training opponents" - primarily Goron Soldiers, although as more soldiers are defeated, Goron Captains will appear on the map - within the allocated four minutes. .

After 300 enemies have been defeated, Daruk will appear. Defeating the Goron Hero will complete the challenge.