Hero of the Rito

From Zelda Dungeon Wiki
Jump to navigation Jump to search
Want an adless experience? Log in or Create an account.
Hero of the Rito 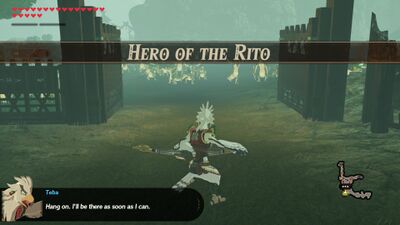 "Rito soldiers are being attacked by monsters who possess the power of lightning. It falls to Teba to rescue the endangered soldiers."

Hero of the Rito is a challenge scenario of Hyrule Warriors: Age of Calamity, unlocked by completing The Great Plateau scenario. Play as Teba and aid the two Rito Captains by defeating the Electric Moblins. There is initially one Electric Moblin near each Rito Captain, but an additional one will appear, once Teba has aided one of the captain. When all the Moblins have been defeated, an Electric Lynel will appear.