Mighty Thunder of the Gerudo

From Zelda Dungeon Wiki
Jump to navigation Jump to search
Want an adless experience? Log in or Create an account.
Mighty Thunder of the Gerudo 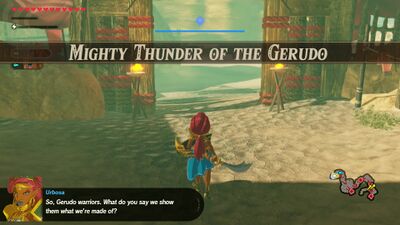 "A horde of monsters has pushed into the Gerudo Desert, and Urbosa has set out to engage them. Capture the enemy outposts, and bring peace to the desert."

Mighty Thunder of the Gerudo is a challenge scenario of Hyrule Warriors: Age of Calamity, unlocked by completing the Through the Desert challenge.

Play as Urbosa and one other unlocked warrior and capture the three outposts. As the challenge goes on, Moblins will appear near the Allied Stronghold, and if the base falls, the mission will fail. It is a good idea to keep one warrior near the Stronghold, while the other attacks the outposts.

Later in the battle, Fire Moblins will appear near the allied stronghold. At the three outposts, Urbosa or her ally will battle a Moblin, some Blue Moblins, and a pair of Electric Moblins.