From Zelda Dungeon Wiki
Jump to navigation Jump to search
Want an adless experience? Log in or Create an account.
Electric Wizzrobe 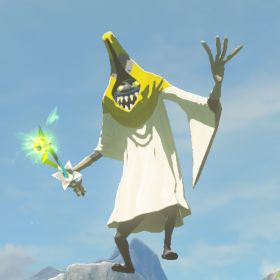 An Electric Wizzrobe is an enemy in Breath of the Wild and Age of Calamity.

"These spell-casting monsters can be found all over Hyrule. They use their lightning rods to hurl balls of electricity or to summon monsters surging with electricity and have been known to cause thunderstorms in the area. The weather will normalize once the Wizzrobe is defeated."

In Breath of the Wild, Electric Wizzrobes can be seen prancing about in select locations in Hyrule, and will only attack if Link nears. They will taunt him, and as he approaches, the Wizzrobe will teleport around and cast lightning spells at Link. If Link doesn't eliminate the Wizzrobe quickly, it will cast a strong thunder spell, which will cause powerful lightning storms to surround the area.

If hit by ball lightning from the Wizzrobe, Link will drop some of the items he has in-hand unless he has the Unshockable Set Bonus from an upgraded Rubber Set. Upon death, they will drop the Lightning Rod they carry.

In Age of Calamity, Electric Wizzrobes are common enemies, first appearing in the Road to the Ancient Lab scenario. They will shoot electric attacks from their Lightning Rod which can electrocute nearby warriors. Upon dodging their attacks, their weak-point gauge will appear, allowing for an opening for the warrior to defeat them. Once they are defeated, an Electric Wizzrobe will drop small electric orbs, which are used as ammunition for the warriors Lightning Rod.

For every Electric Wizzrobe that is defeated, the player will receive a Wizzrobe Trophy, which can be used to complete quests or upgrade weapons of the various warriors.