From Zelda Dungeon Wiki
Jump to navigation Jump to search
Want an adless experience? Log in or Create an account.
Sky Octorok 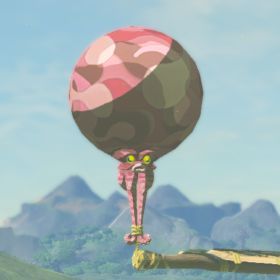 "These low-level, octopus-like monsters used to be aquatic, but their inflatable air sacs evolved so that they are able to float around in the air. Other monsters are known to take advantage of this ability, using them to make floating fortresses. They are trained to ascend when they hear a whistle but they will not attack. "

A Sky Octorok is a type of Octorok found in Breath of the Wild and Age of Calamity.

They can be found tied to, and holding up, wooden platforms in the sky, exclusively in Master Mode. Shooting one will instantly pop it. Most will also ascend when they hear Link whistle.

When defeated, they drop the contents of the plank they are holding. Unlike other enemies, Sky Octoroks do not need the Blood Moon to respawn and do not drop materials when defeated. In practical terms, they're basically non-exhaustible Octo Balloons, though Link can't use them. Some of them will ascend when they hear a Bokoblin Horn or Link whistling. Sky Octoroks appear in groups of three or four holding planks containing Treasure Chests and/or enemies. They are harmless to Link.