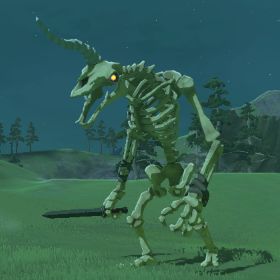 "The remains of Moblins appear in the dark of night. Even the toughest Moblins become fragile when they're little more than a pile of bones, so they'll crumble after just a few attacks. However, as long as a skull remains intact, they'll continue to pull themselves back together and go on fighting."

Stalmoblins are enemies which appear in Breath of the Wild. These large monsters only appear only at night, and tend to swarm Link in groups of 2-3. Their weapons of choice typically include strong, Moblin-crafted weapons such as the Dragonbone Moblin Club. They will collapse after one or two hits, but their head will keep moving, and if it isn't defeated quick enough, it will re-assemble itself. Upon death, they may drop some Moblin Horns or Fangs.