From Zelda Dungeon Wiki
Jump to navigation Jump to search
Want an adless experience? Log in or Create an account.
Blue Lizalfos 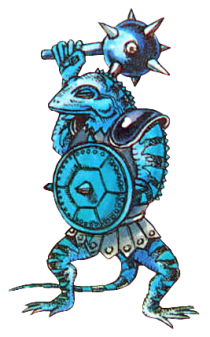 Blue Lizalfos official artwork from The Adventure of Link

The Blue Lizalfos is an enemy that appears in The Adventure of Link, Breath of the Wild and Age of Calamity. It is a stronger variant than the traditional Lizalfos.

As the Blue Lizalfos is one of the most powerful enemies in the game, it can be found exclusively within the Valley of Death, just before Link arrives at the Great Palace. Even with a fully powered up Level 8 attack, this tough enemy will still require three hits of damage. If the Blue Lizalfos is able to get a hit on Link, either by coming into contact with him, or by tossing its mace, it will deal considerable damage. Even if Link has a Level 8 Life upgrade, the Blue Lizalfos attacks will still deal a full block of damage.

In Breath of the Wild, the Blue Lizalfos are tougher versions of the standard Green Lizalfos.[1] With a standard health of 120, they can take more than double the amount of damage than their green counterpart.

Blue Lizalfos are commonly found in the Wasteland Tower region, all over the Gerudo Desert. They can also be found in Lanayru, around Zora's Domain in all directions. There are also an abundant amount of Blue Lizalfos on the road in Tabantha Frontier, that leads northward across the Kolami Bridge, towards the Rito Stable.

By far the most commonly wielded weapons are the Lizal Forked Boomerang and the Enhanced Lizal Spear. However, they occasional wielded some non-Lizalfos weapons, including a Spiked Moblin Spear or a Knight's Claymore.

Like the standard Green Lizalfos, these enemies will drop Lizalfos Horns and Lizalfos Talons when defeated. However these stronger variants will also occasional drop a Lizalfos Tail as a reward.

Blue Lizalfos in Age of Calamity are weaker enemies, which are a step up from the base Lizalfos. They are common, first encountered in The Yiga Clan Attacks! scenario. They will occasionally drop a Lizalfos Horn, Lizalfos Tail, or Lizalfos Talon when defeated. After each Blue Lizalfos is defeated, the player will receive a Lizalfos Trophy, which can be used to complete quests or upgrade weapons of the various warriors.

Larger Blue Lizalfos will occasionally appear as the leader of an outpost. They deal more damage, have more health, and once defeated, allow the warrior to capture the outpost.