From Zelda Dungeon Wiki
Jump to navigation Jump to search
Want an adless experience? Log in or Create an account.
Sentry 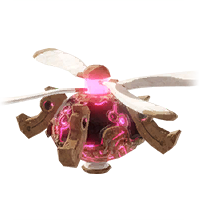 Sentries are enemies that appear in Breath of the Wild. They can be found patrolling the path up Death Mountain when Link and Yunobo attempt to reach the Divine Beast Vah Rudania. They appear as non-attacking miniature versions of Guardian Skywatchers that perform similar patrolling and surveillance functions.

If one spots Link or Yunobo, Vah Rudania will be alerted and will attack the volcano itself, causing it to erupt and shower down volcanic bombs in the surrounding area. The sentries themselves never directly attack. They can be defeated in multiple ways, including using the Remote Bomb Rune from above, or using nearby metal crates to cause wreckage. This is the only time sentries are encountered in the game.

Destroying Sentries is not the only way to clear Death Mountain, but it's the most effective method to reach it unimpeded. As such, the road up the mountain features several alcoves that provide cover from both the Sentries' detection and the attacks from Rudania, as well as vantage points to destroy the Sentries from above. The problem with not destroying them comes from the fact that Link is escorting Yunobo to use him as a cannonball against Vah Rudania, and he's both slow and somewhat unreliable, and thus highly detectable by the Sentries.