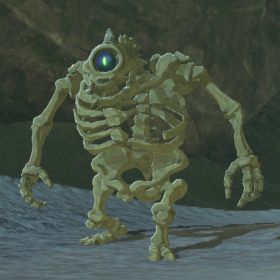 "The mere remains of what was once a giant monster known as a Hinox. These skeletal beasts appear at nighttime. Much like their living counterparts, the Stalnox will tear entire trees from the ground to use as weapons. Furthermore, even if it appears defeated at first, it will keep coming back for more as long as its eye is left intact."

The Stalnox is a skeletal variant of the Hinox. It follows some of the rules of other skeletal monsters: at daylight, the Stalnox collapses and becomes a collection of bones again.

As with any Hinox, their biggest weakness is the eye. A well-aimed shot will give Link a chance to land more hits. There is only one difference: unlike the Hinox, the Stalnox takes more than just arrows. Once their health is reduced to below 50%, the eye will fall out of its socket and will be vulnerable to close-combat sword strikes. This is the only way to deal damage to the beast during this phase, as the bones become invincible. After Link lands a couple of hits on the eye, it will return to its owner and will need to be knocked out again. At this stage, the Stalnox will become wise to the attacks, and begin covering its eye. The best strategy is to get close to the Stalnox, and let it attack. Then, loose an arrow into the eye once it is exposed, and it will drop out.

One tactic that can be used if Link runs out of melee weapons is to shoot the eye, which causes the Stalnox to drop to the ground. Link can run up to it to find more weapons.

Stalnox and the Stal Enemy Family

The Stalnox is a stal enemy (or skeletal enemy). That means many things. As a member, here are some things they can do.