From Zelda Dungeon Wiki
Jump to navigation Jump to search
Want an adless experience? Log in or Create an account.
Hylian Shield 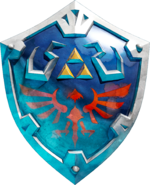 The Hylian Shield is a recurring item in The Legend of Zelda series. It is Link's most famous shield. It is a fairly durable shield, not burning and absorbing tons of damage.

The Hylian Shield has a wooden base with a metal overlay, although in Twilight Princess, the shield is completely metal. In all appearances, the shield is resistant to fire. In Skyward Sword, the shield is indestructible and is also resistant to electricity. It is very durable, capable of blocking a large variety of attacks without breaking. It is the shield the Hylian soldiers use in war.

Link can find the Hylian Shield in a grave in the Kakariko Village Graveyard at Kakariko Village, or purchase it from the Bazaar in Hyrule Castle Town in the present or Kakariko Village in the future for 80 Rupees. Link can receive a discount at the Bazaar after giving Zelda's Letter to the soldier guarding the Death Mountain Trail. It is the second shield Link receives in the game. Link can use it as a child and as an adult. However, the shield is too big for Link when he is a child, so when he uses it, he keeps it strapped to his back and crouches down to defend from above. Link uses it as a normal shield when he is an adult. Extra Hylian Shields can also be found scattered in treasure chests in dungeons. However, if Link already carries a Hylian Shield, it will be replaced with 5 Rupees. The design of the shield in Ocarina of Time is a little different than in other games; the design features a fourth triangle, and the reason for this triangle is unknown, but it may represent the Light Force revealed in The Minish Cap.

After clearing the Twilight from the Eldin Province, Link can purchase the Hylian Shield at Malo Mart in Kakariko Village for 200 Rupees. It is the third and final shield in the game. Unlike the Wooden Shield and the Ordon Shield, it cannot burn from exposure to fire.

The Hylian Shield is obtained once Link defeats eight consecutive bosses in the Thunder Dragon's Lightning Round. Unlike all other shields in the game, it is indestructible; it also resists fire and electric attacks.

"A shield that's based on Hylian design. Raise it with [R] to block flames and beams."

The Hylian Shield is found within Turtle Rock, one of the seven Lorule dungeons, on the second floor after defeating four Wizzrobes.[3] Because of Link's choice as to which dungeons to tackle in whatever order, the Hylian Shield can be acquired fairly early or even at the end of the adventure.

The main improvements in the Hylian Shield over the regular Shield are its ability to block flames and beams, such as a Wizzrobe's attack or any flame-based projectile. Furthermore, it can block the Buzz Blob's electric attacks without hurting Link despite being made of metal. Even if the shield gets eaten along with Link by Like Likes, it won't be destroyed.[4] As a result, it is very useful against enemies, particularly in the Treacherous Tower, where there are plenty of projectile-using foes.

"A shield passed down through the Hyrulean royal family, along with the legend of the hero who wielded it. Its defensive capabilities and durability outshine all other shields."

The Hylian Shield has a base Shield Guard of 90 and base durability of 800, making it easily the most durable shield in the game.

Found in a large room in the Hyrule Castle Lockup, the room contains a Stalnox which must be defeated before a chest appears with the shield inside. There is a Stone slab in the room stating that this was a test room for the Royal Guard, meaning a Hinox would need to be defeated in single combat for one to become a member of the Royal Guard.[5] This is the only time the Shield will spawn here, as further visits to the Lockup will not manifest the chest. The Hylian Shield thereby obtained may have durability bonuses.

The Hylian Shield is one of the absolutely best shields in the game for shield surfing due to its high durability. Provided it's not used for anything else, and taking into consideration its average friction rate (1/4 durability point/sec) and its durability (800), the shield can be used more than 53 minutes of surfing without breaking.

Link can only have one Hylian Shield at a time. If the shield breaks, Link can go to Tarrey Town to buy a new one from Granté for 3,000 rupees, provided the side quest From the Ground Up has been completed. In addition, if you display this shield in your house near Hateno Village, this shield will not be available for purchase. Also, the shield bought from Granté will not have any possible durability bonuses.

The shield will only have bonuses while it stays at the Lockup. As mentioned before, the shield sold by Granté will not have modifiers regardless of whether the initial shield had them.

The bonuses depend on the level of progression in the game, and the shield in the Lockup only will present high (yellow) modifiers the longer the game is played, so if one is pursuing the highest values, the later the shield is picked up, the better.

Due to the fact that there's only a scant amount of non-Lynel enemies that would necessitate a 90+ Shield Guard to disarm with a Perfect Guard, and given that Lynels themselves do not drop their weapons under any circumstances unless killed, it may be preferable to obtain a Hylian Shield with Durability Up modifiers so that it lasts longer.

Link receives the Hylian Shield from Tarin at the beginning of the game. It replaces the Level-1 Shield. If Link loses the shield (eaten by a Like-Like, for example), a new one can be purchased from the Town Tool Shop or won at the Trendy Game.

When Link equips the Master Sword, the Hylian Shield is automatically used as his shield.

In Soulcalibur II, the Hylian Shield is among Link's most common shields, used with almost every weapon he wields. It is his default shield, as it is used when combined with the Master Sword. Link also uses the shield with the Razor Sword, Megaton Hammer, Cane of Byrna, Biggoron's Sword, Great Fairy's Sword, and Bug Net. Out of Link's 11 weapon sets, only four do not use the Hylian Shield.

In the Switch release of Skyrim, the player can use Amiibo to get items. The Zelda series Amiibo have a chance of giving the player unique gear. Among these is the Hylian Shield, which is essentially just an Elven Shield.