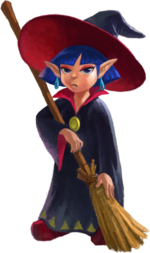 Irene is a character featured within A Link Between Worlds. She is a junior witch, claiming to be the best witch of her generation.[1] Considering A Link Between Worlds takes place only a few generations after A Link to the Past, it is possible that she is a descendant of Maple and Syrup. When Link rings a special Bell given to him by Irene, she gives Link a ride to any Weather Vane that he has activated in the world he is currently in. Irene's grandmother is also a Witch that sells potions to Link over at the Witch's House.

Irene turned into a painting.

Very early on in the game, Link can see Irene flying around, but she does not come down to talk to Link. After Link has completed the Eastern Palace, Irene will fly down towards Link near the Fortune Teller or near the bridge by Link's House. She tells Link that the fortune teller told her that she will run into disaster if she doesn't take care of something green. She then gives Link a bell to call her with. Whenever Link is outside, he can call Irene, and after a short dialogue, she will whisk Link away to the requested destination.

Sometime after Link has acquired both the Pendant of Wisdom from the House of Gales and the Pendant of Power from the Tower of Hera, Irene will disappear and only her broom will appear to transport Link around Hyrule.

If Link visits the Witch's House, he can learn from Irene's Grandmother that Yuga had come to the shop and turned Irene into a painting. The elder witch was helpless to prevent Yuga from attacking her granddaughter. Irene will remain in Yuga's possession until Link enters Lorule.

After Link journeys into Lorule, the seven sages are scattered throughout the overworld. While in Lorule, calling Irene will bring by her broom, with the only dialogue being "...". After completing the Desert Palace, Link discovers that Irene is a descendant of one the Seven Sages, and was thus captured in a painting by Yuga. After her capturing her broom will still come flying to transport Link, but with nobody controlling it. Irene's painting can be found in Misery Mire after completing the Desert Palace, where it is being guarded by Zaganaga.

Once Irene is rescued, she appears in the Sages' Realm, along with the other rescued sages. Her broom still has no pilot, but the dialogue with Irene before every ride resumes.

Irene, along with the seven other sages use their power to give Link the Triforce of Courage and also work to break the barrier that is surrounding Lorule Castle. After Link defeats Yuga Ganon and completes the quest, Irene returns to the Witch's House.