From Zelda Dungeon Wiki
Jump to navigation Jump to search
Want an adless experience? Log in or Create an account.
Lorule Castle 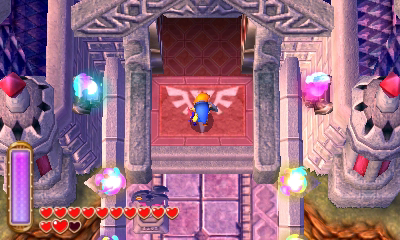 Lorule Castle is the final dungeon in A Link Between Worlds. The dungeon can only be accessed after saving all seven sages and obtaining the Triforce of Courage. Link can then walk up to the Castle Entrance, where Hilda will break the barrier surrounding it, and allowing Link to enter.

Lorule Castle can only be accessed after saving all seven sages from across Lorule. After saving them, Link will be able to obtain the Triforce of Courage. Link can then walk up to the Castle Entrance, where Hilda will break the barrier surrounding the castle, allowing Link inside.

Lorule Castle acts as a counterpart to Inside Hyrule Castle and the two are completely different in most respects. The lower parts of the Castle is completely covered in lava, and the entire dungeon is colored a bright purple.

Most of the dungeon consists of fighting the four Mini-Bosses from previous areas in the game. This makes the dungeon largely similar to other end game dungeons in the series, such as Ganon's Tower in The Wind Waker and Ganon's Castle in Ocarina of Time.

After defeating the Mini-Bosses of the dungeon, Link will advance to Hilda's Throne Room and eventually to a fight with Yuga and the end of the game.

The Red Mail can be found in Lorule Castle and serves as the dungeon's item.

These are the enemies encountered in Lorule Castle.

Unique to Lorule Castle, the Mini-Boss battle consists of fighting four previous Mini-Bosses or Bosses from earlier in the game. This includes fighting a Gigabari, a purple Moldorm, a Ball and Chain Soldier, and Arrghus. Along with fighting these enemies again, Link must also progress through special areas that appear much like the dungeon the enemy was originally fought in. Traveling through these areas and fighting the bosses makes up most of the dungeon, making it shorter and much more different than others.

The Boss of Lorule Castle is Yuga. Yuga, in the form of him merged with Ganon's body, also serves as a final boss to the entire game.

During the first phase, Yuga will attempt to use the Trident to stab Link, but this can be avoided by sidestepping. Link can then use the sword to deliver slashes before the boss teleports to another area of the room.

During the third and final phase, Yuga will merge back into the wall, where Link must shoot a Light Arrow around the wall's entire room, hitting the boss on the back again. Link can then deliver the final attacks to defeat him.