Swamp Palace (A Link Between Worlds) 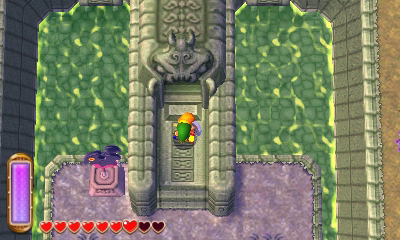 The Swamp Palace is located in the Southern Ruins of Lorule, in the area between Misery Mire and Lorule Lake. The entrance is initially blocked by a giant stone slab that is impossible to destroy with normal Bombs. However, Link can obtain a Big Bomb Flower from the Bomb Flower Shop south of Thieves' Town for 200 Rupees. This bomb follows Link wherever he travels and is highly susceptible to enemy attacks. If Link can manage to walk it down to the Swamp Palace entrance, then it can be used to blow up the stone slab, allowing the water to drain out of the dungeon. After the water drains out, the Hookshot can be used to reach the main platform, allowing Link to enter the dungeon.

The Swamp Palace is considered to be the water dungeon of A Link Between Worlds. Thus, it features water as mechanism to navigate the dungeon, and also features some water based enemies that are rarely seen anywhere else in the game. As the Hookshot is the dungeon's item, some enemies will also require it in order to defeat them.

Using the Hookshot, Link can raise and lower the water level in certain rooms via special control valves found exclusively in this dungeon. The water level can be raised and lowered to three different levels, allowing Link to explore different rooms and find items and chests in rooms he could not before.

The Hookshot can also be used to latch onto certain wooden targets, from which he can merge onto walls that otherwise could not be reached. These wooden platforms are found exclusively in this dungeon, except for a few mini-dungeons where the Hookshot is used.

The Blue Mail can also be found in this dungeon, which will halve the damage that Link takes.

These are enemies encountered in the Dark Palace.

The Mini-Boss of this dungeon is a Gigabari. This super-sized golden Bari acts just like any other; slowly floating around the room and becoming electrified every few seconds. The sword can be used to attack it's body, but long range weapons like the Bow and Hookshot are more effective.

After the Gigabari starts to blink red it will soon split into several smaller Biri that act much like their predecessor. Long range weapons work well on these as well. The Fire Rod works especially well, and can be used when the Gigabari initially splits to defeat all of the Biri at once.

The Boss of this dungeon is Argghus. He resembles a giant jellyfish with multiple "eyes" floating around him. Link must use the Hookshot to draw the eyes away from his body and attack them with the Master Sword until none of the surrounding eyes are remaining. Then Link will be able to attack Argghus's main body, allowing for his eventual defeat.

Argghus only has one attack during his first phase, which is to shoot the smaller eyeballs at Link. During his second phase, it will often try to land on Link from up high. It will also try and shoot lasers at Link, which will explode in a small circle after landing in the water.