From Zelda Dungeon Wiki
Jump to navigation Jump to search
Want an adless experience? Log in or Create an account.
Gigabari 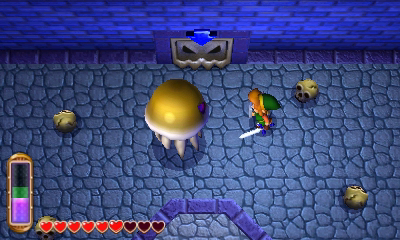 Gigabari is a mini-boss that appears in A Link Between Worlds. It can be found in both the Swamp Palace and Lorule Castle. It is essentially a large giant Bari that will split into 15 smaller Biris when enough damage is done.

The strategy to defeat a Gigabari is similar to that of a Bari, which is to attack it with the sword when it is not pulsing with electricity. There are notable differences however, in that: the boss takes more hits before it will split, and that due to its large size Link will be knocked backwards. This is especially problematic in Lorule Castle, where Link should be cautious not to be knocked back into a lava pit.

The Hookshot, the Bow, and the Fire Rod work particularly well against this mini-boss, due to their long range attacks. Link will then be able to avoid being shocked by the electric body and taking damage. This method works well for the smaller Biri, who possess their own electrical charge.