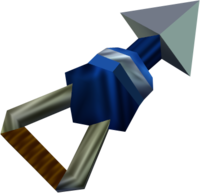 The Hookshot from Ocarina of Time
In Other Languages[show][hide]

The Hookshot, also known as the Hook Shot in early games, is an item found throughout The Legend of Zelda series. It is a hook that stretches out on a chain allowing Link to attach to various items and pull himself towards them. This includes, but is not limited to blocks, targets, wooden beams, chests, and enemies. The Hookshot can also pull objects to Link. The element that decides this is the weight of the object in comparison to Link. If the object is heavier, Link will be pulled towards the object, and vice-versa. This can be varied by changing the weight of Link using the Iron Boots.

"Hookshot
The Hookshot is a very versatile tool. It has several different uses. Link should use it mainly as a grappling hook to pull himself across various gaps. The end of the Hookshot will latch onto a variety of surfaces and objects and then will pull Link toward that object. The Hookshot can also retrieve various items and will stun most enemies."

"The Hookshot is locked in the Big Chest in the Watergate dungeon. Link needs it to proceed."

"Boing! Link has extended the Hookshot and is using it to grapple across a treacherous gap."

The Hook Shot from A Link to the Past

The Hook Shot is the main dungeon item of the Swamp Palace. It is found in the main room inside the Big Chest. The Hook Shot can latch on to jars as well as treasure chests and can do damage and/or stun some enemies. It will spring out in front of Link and travel the length of the screen until it comes in contact with an object or enemy. The Hook Shot will collect items and bring them back to Link.

The Hook Shot acts in the same way as its predecessor. It is found in Catfish's Maw and can be used to pull Link towards blocks.

The Hookshot is found in the Kakariko Village Graveyard as a reward for racing Dampé as an adult. It features a red dot which acts as crosshairs and can connect to wooden objects such as treasure chests, crates, and torches as well as stone targets. The Hookshot is required to enter every temple save for the Spirit Temple and makes collecting Gold Skulltula Tokens much easier.

The Hookshot from Majora's Mask

Unlike many items in Majora's Mask, the Hookshot takes on a much different appearance than in Ocarina of Time, although it works in the exact same way. Before Link sets off to Great Bay Temple, he must first obtain the Hookshot in the Pirates' Fortress. After shooting down the beehive and scaring away the Gerudo Pirates from the throne room, Link can open the treasure chest there to obtain the Hookshot.

The Hookshot in The Wind Waker is very similar to the one in Ocarina of Time, with the exception of the fact that if Link wears Iron Boots while using the Hookshot, several objects will be pulled toward him. It is found in the Wind Temple.

In the newest Zelda adventure, A Link Between Worlds, the Hookshot can be rented from Ravio through his shop. It can hook on to anything that is made of wood, and thus can be utilized to travel over gaps. Its rent price is 50 Rupees.

In Hyrule Warriors, the Hookshot is a sub-weapon that is obtainable through Legend Mode. The Hookshot can be used to reach certain platforms, drag yourself to enemies, and to bring down Argorok. If Link picks up the power-up for the Hookshot, it can be used to pull down the Moon on to the enemy that was targeted.

Found in Ocarina of Time, the Longshot is almost the same item as the Hookshot, except it has twice as much chain. It is found in the Water Temple.

Found in Oracle of Ages, the Switch Hook will switch Link with the object struck. It is found in the Skull Dungeon.

The Long Switch is a longer version of the Switch Hook. It is found in Jabu-Jabu's Belly.

Found in Twilight Princess, the Clawshot can attach to grates and vines and can be adjusted after attached. It is found in Lakebed Temple.