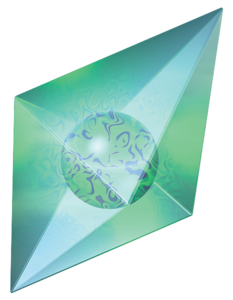 Official Artwork from Ocarina of Time
In Other Languages[show][hide]

Farore's Wind is one of the three spells of the Goddesses that Link receives from the Great Fairies in Ocarina of Time.

Link can use it to create a warp point at the entrance to a dungeon room, and then cast it again at a later time to warp to the point he created. The warp point is single-use, but he can recast the spell to recreate it as long as he has 2 MP.

To get this spell, head to Zora's Fountain and swim behind Lord Jabu-Jabu to a patch of land. There are some boulders here. Throw a bomb at them to break the wall. Enter the Great Fairy Fountain and play Zelda's Lullaby on the Triforce symbol on the platform. The Great Fairy appears and bestows Farore's Wind upon Link.