This article is about the instrument. For the game, see The Legend of Zelda: Ocarina of Time. 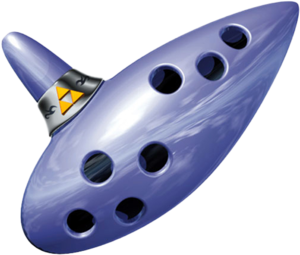 The Ocarina of Time is an item in The Legend of Zelda: Ocarina of Time and Majora's Mask. It is a treasued item passed down by the Royal Family of Hyrule with the ability to alter time and space through music.[1][2] It was created along with the Temple of Time and the Door of Time to prevent those unworthy of touching the Master Sword.

After Link finds all three Spiritual Stones, he returns to Hyrule Castle Town only to be met by Impa fleeing on horseback, Princess Zelda tucked under her arm. When she sees Link, Zelda throws the Ocarina into the moat. Just as they ride out of sight, Ganondorf emerges from the town drawbridge looking for them.[3] After Link refuses to tell Ganondorf where Zelda fled to, Link swims in the moat to retrieve the Ocarina. Upon doing so, Princess Zelda teaches Link the Song of Time in a vision.

It is the only instrument that can open the Door of Time. While holding the three Spiritual Stones and playing the Song of Time at the altar in the Temple of Time, the Door of Time opens, revealing the Master Sword and the entrance to the Sacred Realm.[4]

Link begins the game with the Ocarina of Time, but shortly after, it is stolen by Skull Kid. Link is then transformed into a Deku Scrub and goes around Clock Town looking for Skull Kid. Link learns that Skull Kid is at the top of the Clock Tower. After stunning Skull Kid with a bubble, he can retrieve the Ocarina. After doing so, he recalls the memory of Princess Zelda teaching him the Song of Time.

While in a form other than Hylian Link, the instrument changes into one that better suits his new form. On some occasions, the powers of songs only work on one of these instruments.