From Zelda Dungeon Wiki
Jump to navigation Jump to search
Want an adless experience? Log in or Create an account.
Oath to Order 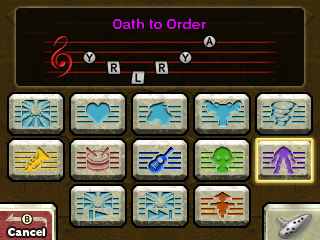 "If you have need, call us in a loud voice by declaring something such as, 'The mountain blizzard has trapped us.' Or 'The ocean is about to swallow us.' Your cries shall carry to us..."

The Oath to Order is the song Link must play on the Ocarina of Time in Majora's Mask to call the Four Giants. If all four Giants are rescued, they come to the Clock Tower and prevent the Moon from falling.

Learning the Oath to Order

""Call us." That's what they're saying. Without being told, we understand. So now you'll help us out in exchange! We'll call you from atop the Clock Tower, so do something about him, all right?"

Link is taught this song after completing the first of the four temples, the Woodfall Temple. In order to successfully use the Oath to Order to save Termina, Link must rescue the other three giants from their temples. The other three giants are located in Snowhead Temple, Great Bay Temple, and the Ancient Castle of Ikana. 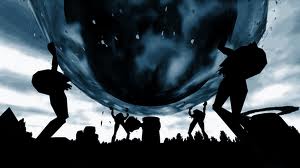 On the Final Day, Link must go up Clock Tower at midnight and call the Four Giants in order to stop the Moon from crashing on to Termina. The Giants hold the Moon in place just long enough for Link to defeat Majora's Mask and save the day. If Link plays the song atop the Clock Tower prior to rescuing the fourth giant, the other giants will attempt to stop the moon, but will ultimately fail. It is at this point Link must play the Song of Time in order to return to the First Day, and attempt to rescue the last giant.