From Zelda Dungeon Wiki
Jump to navigation Jump to search
Want an adless experience? Log in or Create an account.
Ballad of the Wind Fish 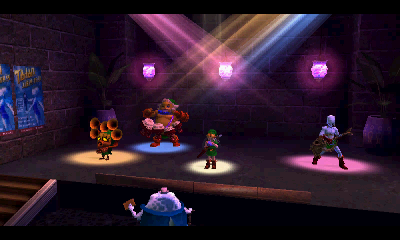 Link as a One-Man Band in Majora's Mask 3D

Ballad of the Wind Fish is a song in Majora's Mask, named after the song of the same name from Link's Awakening.

Ballad of the Wind Fish is a famous song of the Indigo-Go's dating back to the generation before the present Lulu[1], when her mother - also named Lulu - was the lead singer[2]. Gorman claims that hearing it at a Carnival of Time was what made him take up showbusiness[3]. It remains popular in the present day.[4]

When the Indigo-Go's Milk Bar performance at the Carnival of Time was cancelled due to Lulu's lost voice, their manager Toto wanted to do a sound check to see how it would have sounded, and asks Link in his various forms to fill in the various parts.[5] Gorman heckles as Link plays each part, until the song comes together and he breaks down with the memories generated. Thanking Link, he gives him the Circus or Troupe Leader's Mask.[6]