In Majora's Mask, Link can learn a total of thirteen Ocarina Songs, most of which are required to complete the quest. Listed below are all Ocarina Songs, how to acquire them, as well as their uses.

The Song of Time resets Termina's state to the beginning of the game's three-day cycle and (in the Nintendo 64 version) saves the game.

The Inverted Song of Time slows time to one-third speed on the Nintendo 64 version of Majora's Mask, or half-speed in Majora's Mask 3D.

The Song of Double Time advances time - to the next 6am or 6pm milestone in the Nintendo 64 version, or to the beginning of any hour in Majora's Mask 3D.

The Song of Healing transforms certain spirits into masks Link can wear, some of which transform him while he wears them.

Epona's Song can summon Epona to Link's side throughout most of Termina.

The Song of Soaring allows Link to warp to any activated Owl Statue.

The Song of Storms summons rain, which can cleanse certain evil spirits, or water Magic Beans.

The Sonata of Awakening grants access to Woodfall Temple, and can awaken certain beings.

The Elegy of Emptiness allows Link to create a statue-like shell patterned after his current form to help with Stone Tower and Stone Tower Temple.

The Oath to Order summons the awakened members of the Four Giants to the Clock Tower if played there after midnight on the Final Day. 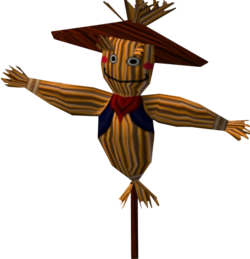 The Scarecrow's Song, which can be any series of eight notes played to the Stylin' Scarecrow, summons him as a hookshot target in certain places.

Ballad of the Wind Fish

An "old standby" of The Indigo-Go's, Link must play it for Toto in the Milk Bar across all four of his forms to get the Circus Leader's Mask from Gorman.

A song jammed out by Mikau and Japas, which Evan happily steals, giving Link a Piece of Heart for bringing it to him.