From Zelda Dungeon Wiki
Jump to navigation Jump to search
Want an adless experience? Log in or Create an account.
Inverted Song of Time 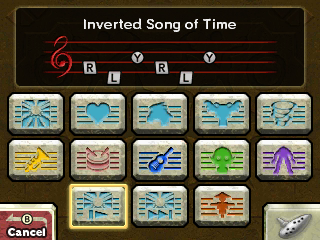 The Inverted Song of Time is a song in The Legend of Zelda: Majora's Mask played on the Ocarina of Time.

Like the Song of Double Time, it is neither directly taught to Link nor stored in the Songs menu on the Quest Status pane. It can, however, be found in the game by speaking to one of the Scarecrows in Clock Town after dancing with one of them. It is a variation on the Song of Time, with all its notes played in reverse order.

Technically, Link can play the Song of Double Time as soon as he has retrieved the Ocarina of Time from the Skull Kid and played the Song of Time for the first time. To find a hint of its existence, he can find a Scarecrow inside of the Astral Observatory or Trading Post, who hints to Link that playing each note of the Song of Time backwards will slow down time.[1]

When played, the song slows down the rate at which time flows, to a third of the standard rate in Majora's Mask (N64), or half-speed in Majora's Mask 3D. This effect only lasts during the cycle in which Link plays the song. Playing the song again allows Link to return the flow of time to normal.