From Zelda Dungeon Wiki
Jump to navigation Jump to search
Want an adless experience? Log in or Create an account.
Song of Time 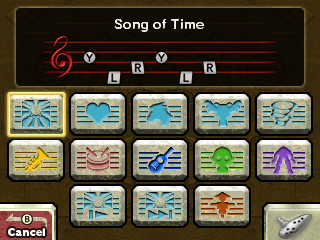 The Song of Time is a song featured in Ocarina of Time and Majora's Mask.

After Link has acquired all three Spiritual Stones and attempts to enter Hyrule Castle Town, Princess Zelda flees with Impa on a horse, and throws the Ocarina of Time in the moat. Ganondorf will follow closely behind. When Link dives into the water to retrieve it, memories of Zelda will be created from the instrument, and she'll teach the song to him. The song can then be played in front of the altar in the Temple of Time, which will result in the Spiritual Stones placing at the hollows on the altar and the Door of Time opening.

After going through a sequence of events to open the Clock Tower as a Deku Scrub, Link will shoot the Skull Kid with a bubble. This causes the imp to drop the Ocarina of Time. When Link retrieves it, memories of Zelda come to him from when she taught him the song. The song can be played to return to the Dawn of the First Day and, in the N64 version, saves the game.

The song is used to open the Door of Time in the Temple of Time to gain access to the Master Sword.

It is also used, most notably in the Master Quest version, to move Time Blocks to complete puzzles in some dungeons.

The song will reset all the events of the three days and send Link to Dawn of the First Day. It will also cause Link to lose all expendable items, such as Deku Nuts and Rupees, although he can have the Banker save the latter for him. This prevents the moon from crashing into Termina.

In Ocarina of Time and Majora's Mask, it is played using the C buttons, like all the songs. It is played as follows: → A ↓ → A ↓.